This series of photos taken at the Metropolitan Museum of Art, New York City, shows the similarities between old oxidized Roman glass and Tiffany glass. This is no accident. Tiffany studied Roman glass and loved the iridescence in it and recreated the effects in his work.

Photographs below courtesy of the Met except for the last one by me. 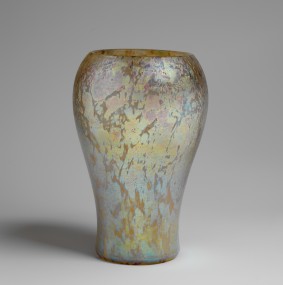 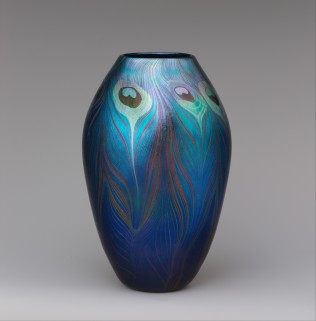 Louis Comfort Tiffany 1848-1933, son of a prominent New York jeweler, studied art in New York and later in Paris. While in France, he met Emile Galle who was producing art glass in Nancy. Tiffany was influenced by the Art Nouveau, Japanese prints, Middle Eastern art, and ancient Roman pottery.

Upon returning to America, Tiffany continued painting and was also involved in decorative arts. In 1875, he founded Louis Comfort Tiffany and patented his first glass-lustering technique in 1881. Favrile glass, the trademark for Tiffany handmade glass, resulted from these experiments in imitating Roman glass. This lustering technique, with its iridescent effect, involved dissolving salts of metallic oxides in the molten glass, creating soft greens, blues, golds, etc. The metallic content was then brought to the surface by subjecting the glass to a reducing flame and spraying with another chloride. This treatment caused the surface to crackle into a profusion of tiny lines that refracted light.

Tiffany retired in 1918. Nash carried on the business. In 1928, L.C. Tiffany severed all connection with the firm, withdrawing permission to use his name.

I used some of the Roman glass to create this:

To buy my images (single use) or my book "Natural Side of the City" click here.

You may not copy or use any of my images without permission. I retain full copyright and ownership of my work. Links to my work may be used if credit is given to Sherry Felix. See license agreement.